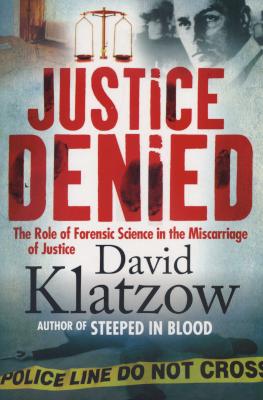 If you are accused of a crime you did not commit, do you believe that justice will prevail in a court of law? Perhaps you should think again…; An innocent woman is almost sent to prison for eight years because of a mistaken fingerprint identification by so-called forensic experts; a chicken farmer is hanged for a brutal murder he did not commit due to incorrect analysis of post-mortem bruising; and a mother is sent to prison for murdering her baby daughter when a substance is falsely identified as blood. These are just some of the major forensic disasters that have occurred over the past 100 years, and which are exposed in Justice Denied.

Contrary to what television series like CSI and NCIS would have one believe, forensic science does not provide instant answers to impenetrable crimes; in reality, forensic science is neither clearcut nor easy to interpret, and practitioners are not all competent – as renowned forensic scientist Dr David Klatzow proves in this book. In Justice Denied, he exposes the miscarriages of justice resulting from the faulty courtroom testimony of corrupt or incompetent forensic pathologists and unscrupulous public prosecutors who seek convictions at all costs. From the infamous Dr Crippen case in 19th-century England to the dingo–baby trial in Australia and the unsolved murder of Inge Lotz, Justice Denied reveals the incalculable damage done both to people’s lives and to justice across the globe.