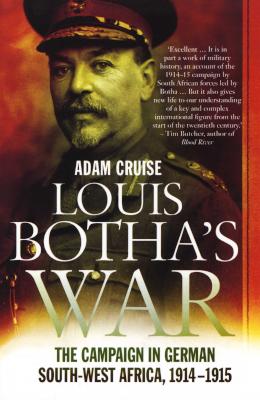 Twelve years after fighting against the British during the Anglo-Boer War, Louis Botha went to war on Britain’s side. As prime minister of the Union of South Africa at the outbreak of the First World War, Botha agreed to lead his country on a campaign against the Germans across the border in South-West Africa. But first he would have to deal with a conflict at home. Many Afrikaners balked at the prime minister’s decision, and so began a war on two fronts. While Union Defence Force troops gathered on the border and prepared to launch an offensive, a handful of Botha’s former comrades incited an Afrikaner rebellion intent on keeping South Africa out of the war, or worse, siding with Germany.

Louis Botha’s War is the story of how a former Boer War fighting-general-turned-politician crushed a rebellion, rallied his country’s first united army to fight in harsh conditions and defeated the enemy in the Great War’s first successful Allied campaign. Botha’s actions and these events would determine the fate of South-West Africa, and its relationship with its southern neighbour, for the next eighty years.