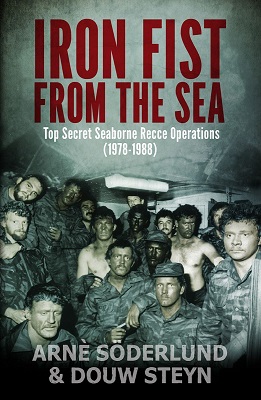 by Arne Soderlund and Douw Steyn

From Cabinda in Angola to Dar es Salaam in Tanzania 4 Reconnaissance Regiment conducted numerous clandestine seaborne raids during the Border War. They attacked strategic targets such as oil facilities, transport infrastructure and even Russian ships. All the while 4 Recce’s existence and capability was largely kept secret, even within the South African Defence Force.

With unparalleled access to previously top secret documents, 50 operations undertaken by 4 Recce, other Special Forces units and the South African Navy are described. The daunting Operation Kerslig (1981), in which an operator died in a raid on a Luanda oil refinery and others were injured, is retold in spine-tingling detail. The book reveals the versatility and effectiveness of this elite unit and tells of both the successes and failures of its actions.